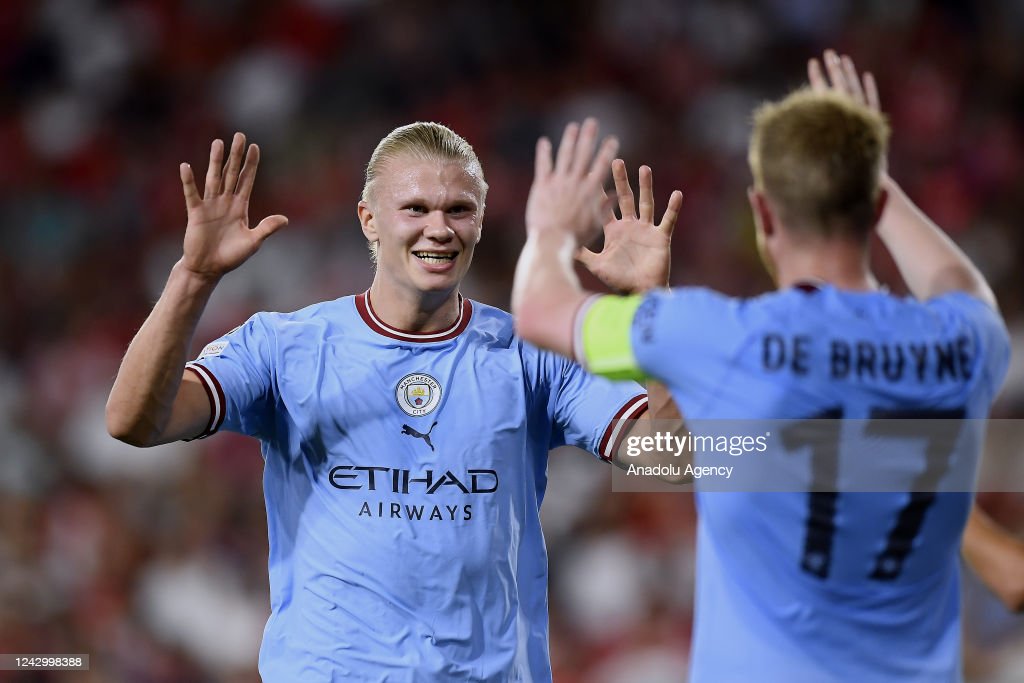 Where: The Etihad Stadium

On Wednesday night, Manchester City and Dortmund go head-to-head at the Etihad Stadium on gameweek two of Group G of the Champions League.

The Citizens had a rest at the weekend due to the passing of Her Majesty Queen Elizabeth ll. Pep Guardiola’s team’s last outing was a 4-0 win at Sevilla in gameweek one of the Champions League.

The win made it seven games unbeaten in all competitions for City this season. They have won five of those seven unbeaten matches too.

City has been lethal in attack this season, scoring at least two goals in six of their seven outings. One of the main reasons for their attacking numbers is former Dortmund striker Erling Haaland, who has scored 12 goals in his last seven competitive appearances. The Norwegian scored a brace in his last Champions League outing. The big forward will no doubt be looking forward to facing his old team.

City are still without defenders Kyle Walker, John Stones and Aymeric Laporte through injury. Manuel Akanji will also face his former club, making just his second appearance for the Citizens. Fellow summer signing Sergio Gomez could feature for just the second time too.

BVB have already experienced a bit of a rollercoaster of a campaign this season. Edin Terzic’s team were on a three-game winning run until a 3-0 defeat at out-of-form RB Leipzig last time out. Ironically, the game saw former Dortmund head coach Marco Rose in the Leipzig dugout for the first time. The loss means Dortmund has now suffered defeat in two of their last five games in all competitions.

Dortmund eased into their Champions League campaign with a comfortable 3-0 home win over Copenhagen. The game was BVB’s second straight win in the Champions League, although they had lost their previous three games in the competition.

The German team haven’t travelled well of late in European football’s elite competition, losing three of their last four away games in the Champions League. A porous defence has been Dortmund’s main issue of late in the competition.

Manchester City will be well rested, which could mean massive danger for Dortmund, who showed their defensive weaknesses against RB Leipzig last time out. We are backing Manchester City half-time/full-time, as the Citizens can take advantage of any chinks in the Dortmund defensive armour.

This should be a highly entertaining and high-scoring encounter, as both teams play such expansive attacking football. With that in mind, we are backing over 2.5 goals scored.

If you are looking for a bookmaker for your bet on Manchester City vs Dortmund, why not check out our betting page for the bookmakers we recommend for your bet? If you want more previews and tips, then you may also be interested in our soccer predictions page, where we post regularly.

Can Dortmund cause an upset in Manchester?