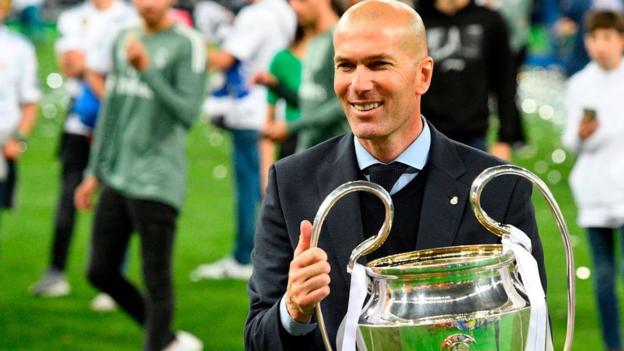 Earlier this week Real Madrid boss Zinedine Zidane called time on his career as Los Blancos boss. The Frenchman walked away from the club from the Spanish capital after winning his third straight Champions League title last weekend against Liverpool.

The achievement was one never seen before since the start of the European Cup back in the 1960’s. Despite the talent at his disposal, it was still a major triumph for the man who formerly won the World Cup with France as a player.

In terms of football, Zidane is a legend for both his playing and managerial career. People will say that he has a great team and great players, but a team can be as talented as you like, it still needs the right man to guide them to success.

Zidane has done that in an extremely impressive way, especially as it was his first managerial job in senior club football. His only previous role as a head coach came with Real Madrid’s reserve, Real Madrid Castilla.

The step up to manage one of the world’s biggest clubs with such ease says a lot about Zidane, his character and his managerial ability. One factor he always had on his side is that the big players respected him because of what he achieved as a player.

It would be hard to argue with the fact that Zinedine Zidane is a great boss. His list of managerial achievements in such a fledgeling career illustrates that perfectly.

Whoever comes in to replace Zidane has a massive job on their hands. How do you follow a boss who has won three Champions League trophies? The only way Zidane’s predecessor can do better is if they win La Liga next season and retain the Champions League, which will be a mammoth task.

Zidane is a big character and as such will be a massive loss to Los Blancos. The Frenchman mention various reasons for his decision to quit his role, including needing a fresh challenge and the pressure and the demands of the role. He also stated that he was not sure how he could keep the team winning next season. His reasons were refreshingly honest.

The Real Madrid job may be one of the most glamorous, but it also one of the most difficult, as Los Blancos are expected to win every game they play. No doubt that is a major strain on the head coach, who is usually the first person to take the blame if the team is struggling.

Zinedine Zidane could retire from football now be happy with his managerial achievements. The 45-year-old has claimed that he is not interested in taking a new job in the near future. However, the former Juventus playmaker seems like a football man, somebody who would find it hard to stay away from the beautiful game too long.

For me, I can see Zinedine Zidane enjoying a long managerial career in the future. Media reports claim that Qatar are set to offer the Frenchman an eye-watering contract worth around £44million per year to manage the national team. However, it seems inevitable that Zidane will manage his own national team at some point in the near future.

Zidane will continue to win trophies as a boss. However, I wonder when he will get credit for being an outstanding boss, as it seems to have eluded him so far his short managerial.